Getting Dark at SDCC: Speaking on Women on the Dark Side panel

Braving Comic-Con this year? If you’ll be in San Diego, take a moment to put your feet up and get ready for a panel! I’ll be joining a group of fabulous female creatives as we discuss the darker side of life and how we incorporate it into our work. From comics and games to non-fiction, this panel will delve into horror and more, and will help you figure out how to wrangle the darkness in your own work as well. Can’t wait to see you at San Diego Comic-Con. Be safe out there!

In celebration of the real Star Wars day, I’ll be speaking about writing droids and galaxies at the one and only Scum & Villainy Cantina in Hollywood. If you love learning about Star Wars and getting into the creative side of science fiction, then come on over. Digital LA will host the Droids & Galaxies panel featuring me and ship designer Sonny Tien Nguyen at 6pm tonight! Hope to see you there!

Speakers will share their stories including their career path in the industry, their projects, and where you can see their work (e.g visit Disneyland Batuu, digital comic, etc.). Intergalactic costumes or shirts encouraged!

Panel 6-7p, followed by networking. During and after the panel 6-7p, enjoy food and drink, including several Digital Drink party specials from the Scum and Villainy Cantina’s new menu, available from 6-8p only.

At 8p, attendees are welcome to join in the Cantina’s weekly Trivia Night, which will feature Star Wars theme. 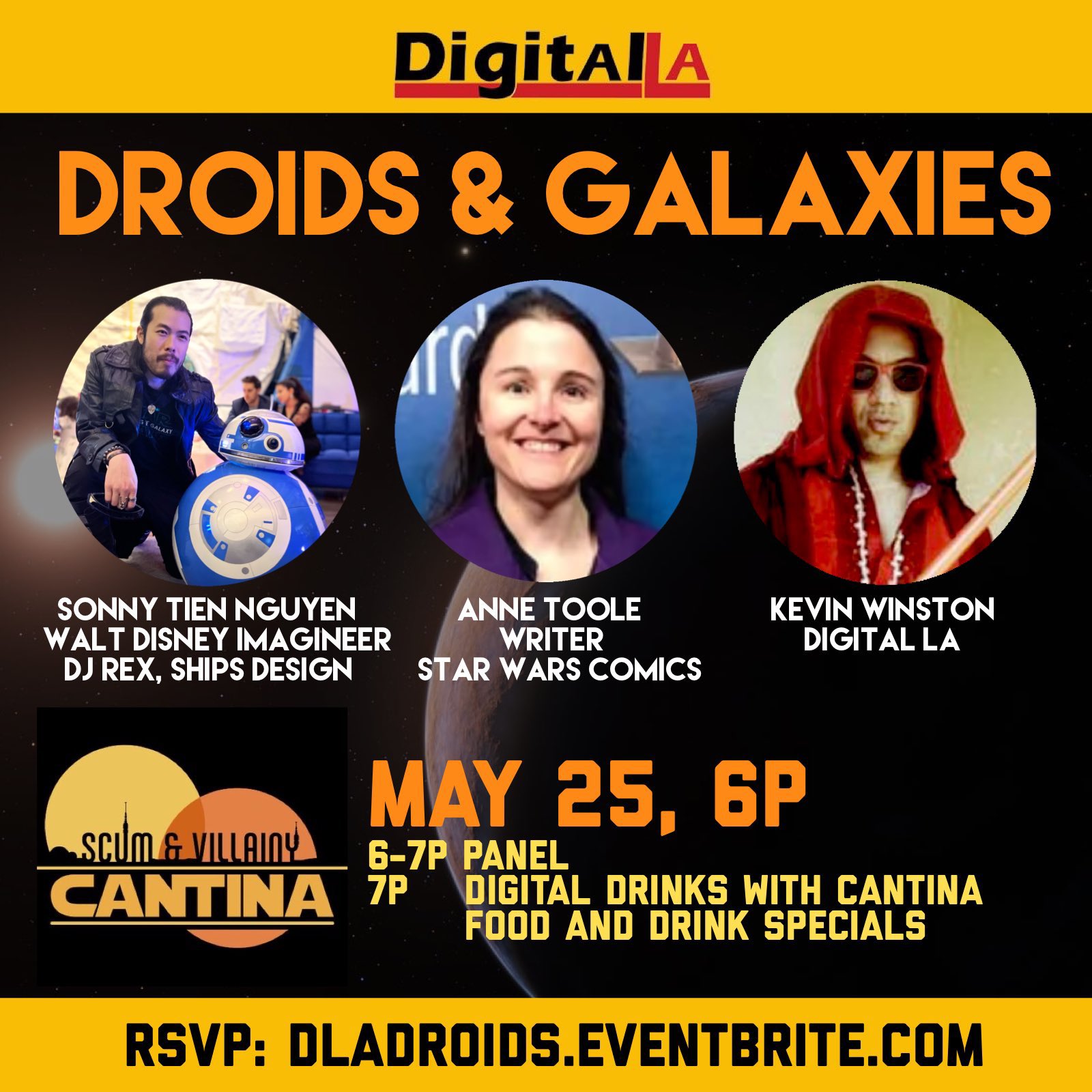 – Sonny Tien Nguyen is a Three-Time THEA Award Winning Walt Disney Imagineer, Creative Designer and Art Director. He worked on several key elements and immersive designs for the Star Wars Galaxy’s Edge Themed Land at Disneyland and Disney World. His works include the creation of droid DJ Rex in Oga’s Cantina, Droid Designs, Land Ornamentation, Graphics and the X-Wings and other star ships including the ITS Ship and the Millennium Falcon exterior and interior cockpit. He is fluent in reading and writing Aurebesh and has created different languages within the land including Droid Depot’s Droidobesh. He also worked on branding and product design including toys, pins, Star Wars Beverages and in-story Coca-Cola bottle drinks. He was integral to the creative core team for Star Wars Galaxy’s Edge from a large scale to all the very intricate details of sets and props for the E-ticket attractions such as The Millennium Falcon Smugglers Run and Rise of the Resistance; as well as the actual flying X-Wings with WDI Research and Development.

– Anne Toole, Writer, Star Wars Adventures. Anne is a Writers Guild Award winning writer who has written for games, comics, and other projects. Her Star Wars related credits include writing stories in Star Wars Adventures #11, and a short story in ‘From A Certain Point of View: The Empire Strikes Back’ anthology. She has written on Horizon Zero Dawn game, for which she won a WGA game writing award, and the Horizon Zero Dawn comic. She has also written stories on Women of Marvel comic anthologies. 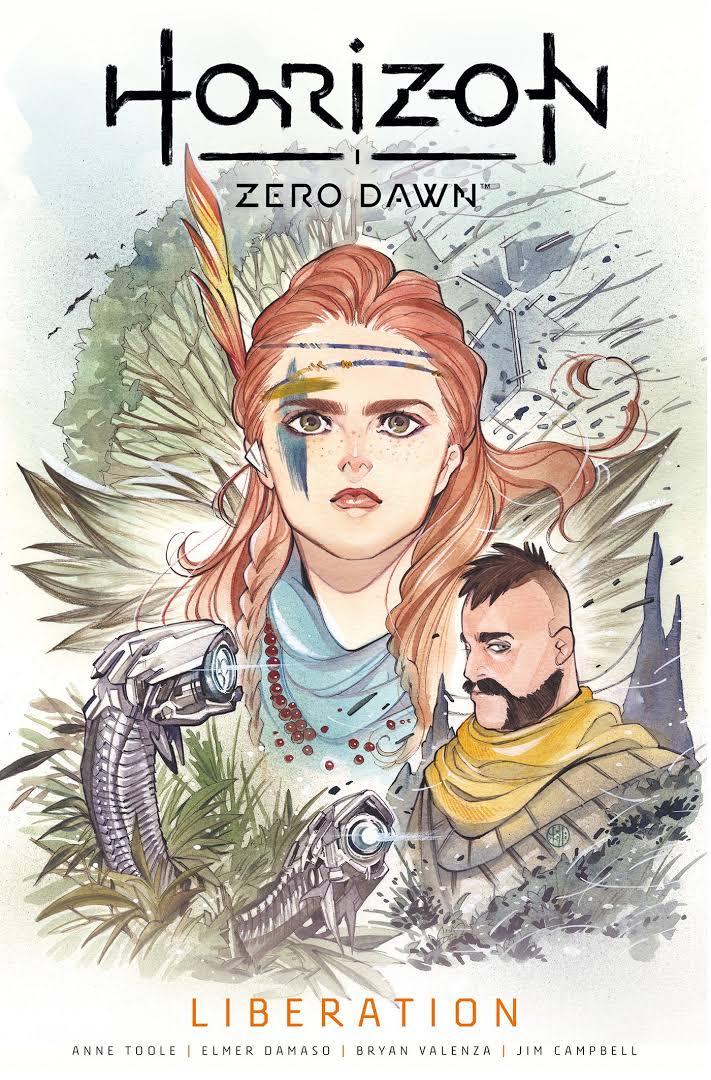 It’s out! Not just HORIZON FORBIDDEN WEST (did ya miss it?), but now the collected paperback of HORIZON ZERO DAWN: LIBERATION is available at your FLCS for your perusal. Written by me with the backing of Guerilla in the one-two punch team of Ben McCaw and Annie Kitain, the collection features art from Elmer Damaso, Bryan Valenza, and Jim Campbell. The series also featured a host of cover artists, featured in the collection as well. Whether you read the original four issue comic mini-series, or were waiting to see them all collected in a book you could sit on, HORIZON ZERO DAWN vol 2: LIBERATION provides the same story all in one place. You can also check it out on Kindle and Comixology, though I can’t vouch for whether you should sit on your Kindle or not.

The story takes place during the events of HORIZON ZERO DAWN. As Aloy seeks answers in the wilds, she comes across Erend, who is looking for answers of his own. He is hunting a man he blames for his sister Ersa’s death. As they track him down, Aloy pulls out of Erend the full story of Ersa, the woman she hardly knew. Ersa’s tale follows palace intrigue during the fear-filled era of Sun-King Jiran and climaxes with the battle for the liberation of Meridian. In the end, Erend will have to face what he has been avoiding ever since Ersa’s death.

HORIZON FORBIDDEN WEST launches today! Years in the making, the sequel to the acclaimed HORIZON ZERO DAWN proves to be, well, equally acclaimed. I had the privilege of writing for both games, and I’m looking forward to playing the latest installment put together by the awesome team over at Guerrilla. Although I contributed less to the actual game this time around (see: pandemic and comics), I’m no less proud to have been involved in such an awesome undertaking. This is what AAA can do!

“Sometimes you just have to sit back and think about what it took to make a videogame and quietly marvel at that. Horizon Forbidden West is a game that invites that sort of quiet awe. Like, Guerrilla games has 360 employees apparently. Obviously many more people will have contributed to this project than those 360. But let’s just say it’s like 1000 right. I still can’t understand how you align the work of 1000 people to produce something like this. … I don’t know man. I legit don’t know. It’s always humbling to play through games like this. It makes you realize what a remarkable accomplishment video games can be. So yeah, Horizon Forbidden West, it’s one for the books.” pulled from https://youtu.be/xdFGdR28Gp8 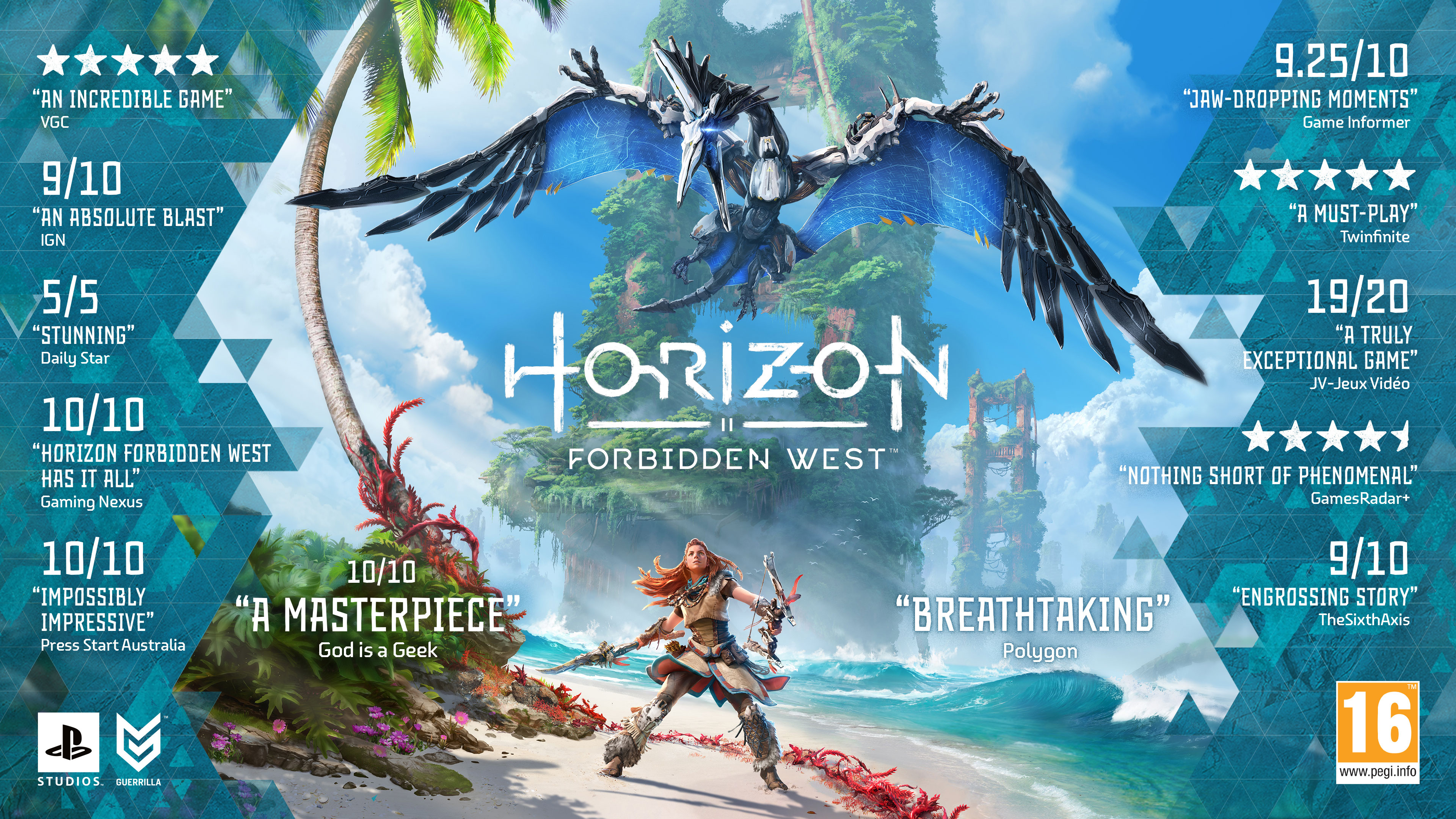 Tis the season to talk about comics! I’ll be joining a bunch of other awesome creatives in comics this Saturday at LA Comic Con and in two week at Comic Con Revolution. Want to learn more about comics writing, character development, and how to support diverse creatives? Then you’ll get two chances to do just that!

Who: Quentin Lee, Jayden Phoenix, Aman Chaudhaury, and Anne Toole
When: Saturday, December 4, 2021, 11:30am PST
Where: LA Comic Con, Room 408B
What: Comics writers and illustrators will discuss diversity (women, ethnicity, people of color, LGBTQ, accessibility, etc) of characters and creators in mainstream and indie comics, and how we can support and increase diversity efforts. We will also discuss how to use social media to help promote work by diverse creators.

What: CCR SPOTLIGHT: PERSPECTIVE IN THE COMICS CREATIVE PROCESS
Who: Barbara Randall Kesel, Henry Barajas, Fabrice Spolsky, Anne Toole
When: Sunday, December 19, 2021, 11:30am PST
Where: Room 105, Ontario Convention Center
How creators bring perspective to characters in comics. This panel will tell you how creators’ experiences in real life shape the fictional lives of some of your favorite characters.

Hope you get a chance to check them out!

Tomorrow, Saturday, I’ll be virtually attending Game Developers Session, where I’ll be speaking on a game narrative panel. We’ll be discussing game narrative, including topics such as silent narrative (yes!), writing for indies, and where game writing is going next. It’s such a great opportunity to be part of the oldest game developers conference in Europe! Log on and check it out!

Hope to see you soon!

I return to the Stars Wars universe with an adventure on board Jabba’s sail barge. Star Wars Adventures #11 from IDW is out today! This Tales of Villainy issue features Jabba at his worst (or best?). With art by the endlessly talented Nick Brokenshire, our story follows Ree-Yees in search of Jabba’s pet Buboicullaar (which I will now never forget how to spell). “Done Dirty” joins another story by Cavan Scott, Manuel Bracchi, and Bracardi Curry, in which Rogue Squadron tangles with the Empire. We not only got to share an issue, but our letterer, Johanna Nattalie, as well!

If you’re looking for all ages adventure, look no further than Star Wars Adventures #11! If you pick it up at your friendly local comic book shop, let me know what you think — and which cover you got! 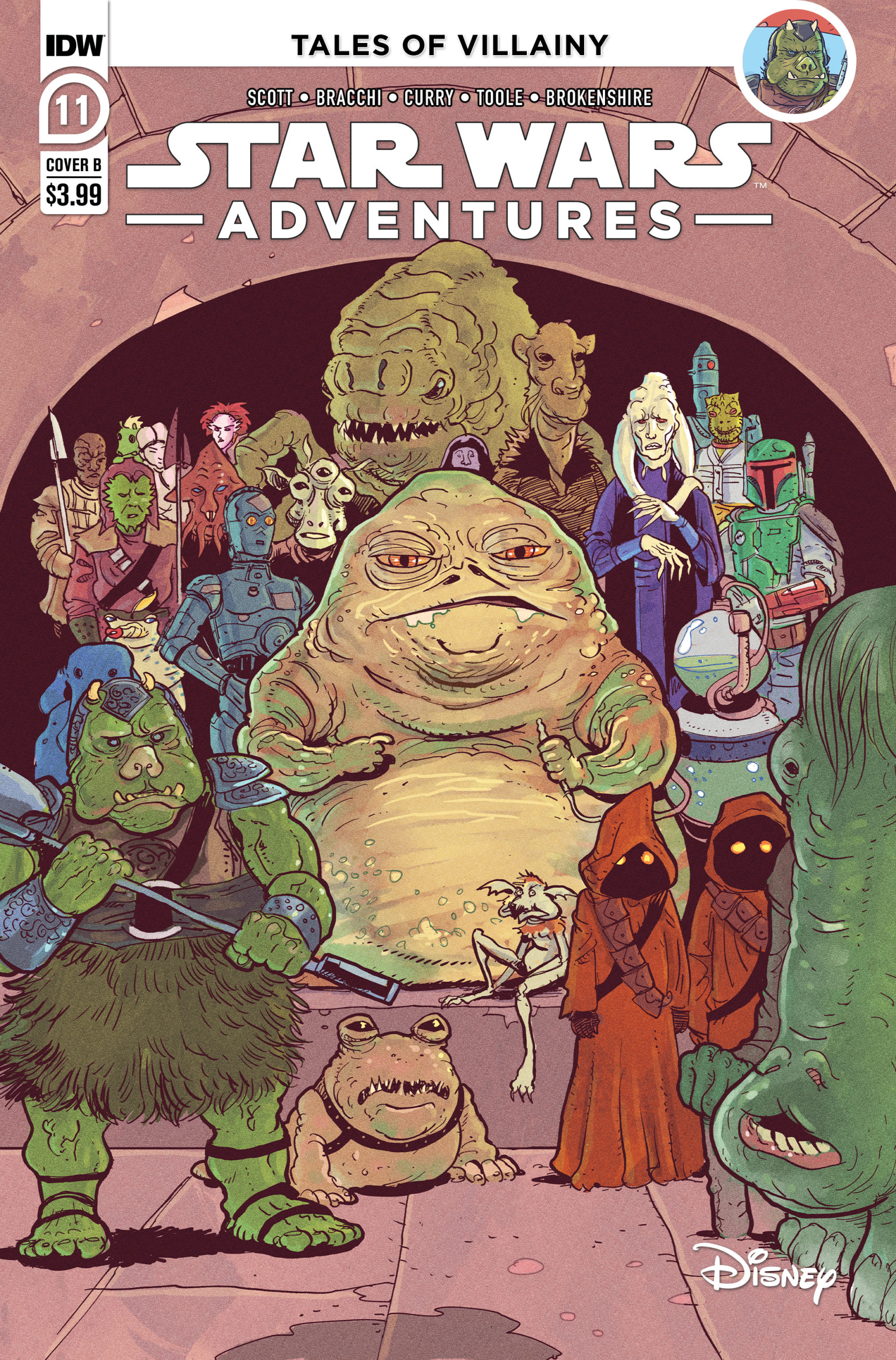 Speaking on working with writers

Tomorrow’s the day (or the morning, or evening, depending on where you are) I’ll be speaking virtually at Level Up Conference 2021 about fitting writers into the game development process. The conference features a bunch of awesome speakers on game design, production and management, and business and marketing. It also participates in the Nordic Games Discovery Contest. Much fun and knowledges will be had by all.

FITTING WRITERS INTO THE DEVELOPMENT PROCESS

Game developers are sometimes left scratching their heads on how to incorporate writers into the game development process. This talk will take attendees through the stages of development to identify how a writer can integrate with the team and add value to the game, whether it be narrative-driven or narrative-light.

Devcom panel on the characters we need right now

It’s a bird! It’s a plane! No, it’s a devcom panel! I’ll be speaking today about writing characters and narrative in games at the devcom Developer Conference (sic). It’s been awhile since I had the opportunity to speak at devcom in person, so it’ll be great to return virtually along with a host of other great speakers. If you’ll be attending, let me know! 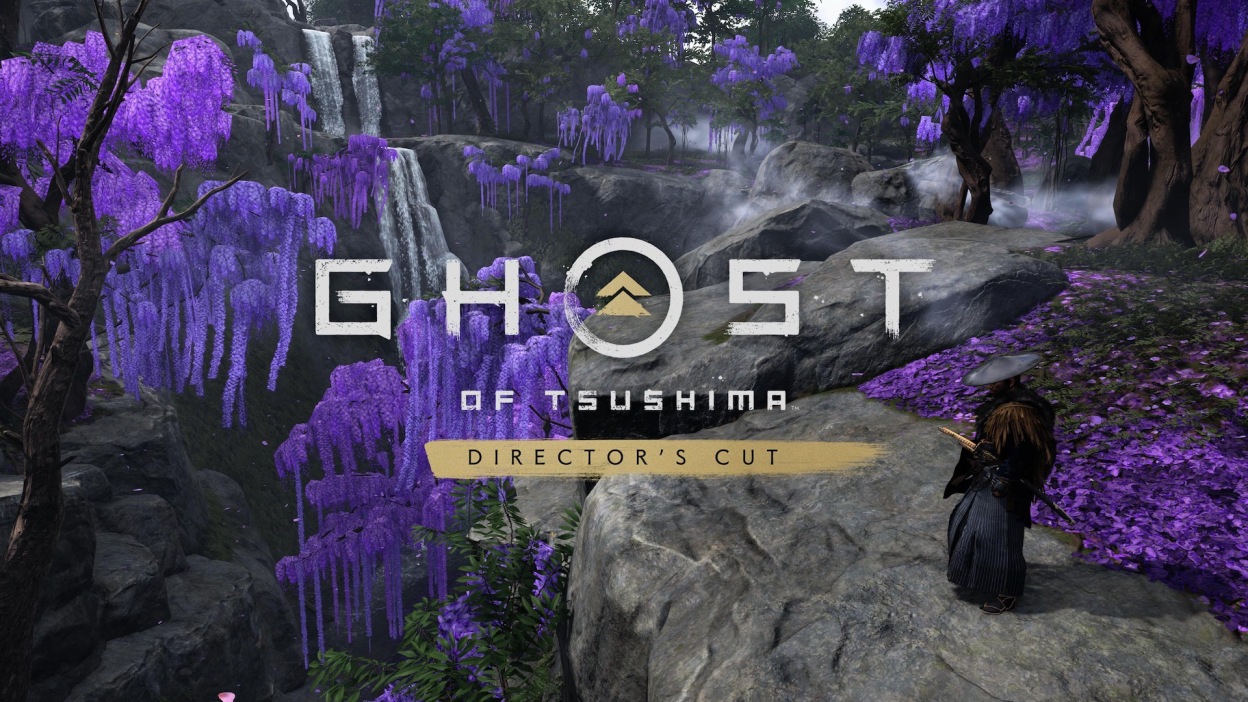 Today’s the day! Ghost of Tsushima: Director’s Cut is now available for your enjoyment on PS4/5. Luxuriate in the beauty of feudal Japan while fighting against a Mongol invasion. I had the extreme pleasure of being one of the writers on this expansion, which takes Jin on a journey to the nearby island of Iki to face the truth about his father. Explore the nooks and crannies of the island to find hidden lore, treasure, and of course, stories. I had a blast working on it, and hope you have a blast playing it. With scenery as exquisite as the first — if not more so on PS5 — you’ll hardly be disappointed. Plus you get to pet cats, deer, and more!

Here’s a review that happens to highlight part of what I worked on, but be forewarned there be spoilers: Ghost of Tsushima: Iki Island just solidified Jin as one of PlayStation’s greatest heroes

And here’s the launch trailer!

And here’s where you pet kitties: 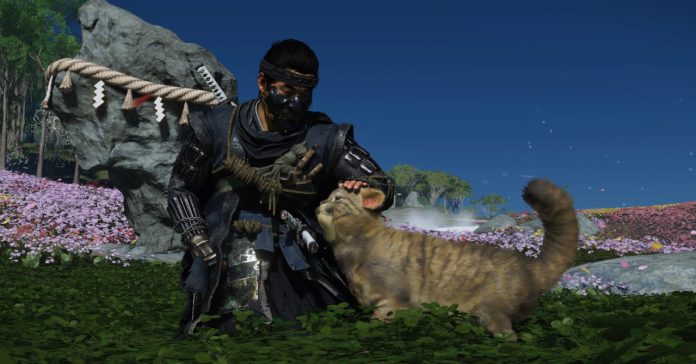 Enjoy, and if you have any awesome photos, please share!